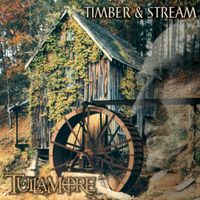 From the recording Timber And Stream

By 1640, the reign of Charles I was well on the road to collapse. The Committee of Three Estates had drawn and signed the National Covenant, and commissioned the Earl of Argyll to take up arms against nobles known to oppose the Covenant. The Earl of Airlie, one of Charles' devoted supporters, retired to England to avoid being coerced into acknowledging the Covenant, and left his estates in the keeping of his eldest son, Lord Ogilvie. Upon learning that Argyll was marching against him with several thousand men, Ogilvie abandoned his father's lands. The Airlie estate and tower (which had stood nearly two hundred years) was burned to the ground. The tune that accompanies the song is, in its earliest printing, We Prefer Our Own King, and used as the melody for the optimistic Jacobite song, "Wha'll Be King But Charlie".

It happened on a day, on a bonnie summer's day, when the sun shone bright and clearly, that there fell out a great dispute between Argyll and Airlie. Argyll, he has mustered a thousand of his men, he's marched them out right early. He's marched them in by the back of Dunkeld to plunder the bonnie house of Airlie.

Lady Ogilvie looked out from her window so high, and oh but she wept sorely to see Argyll and all of his men come to plunder the bonnie house of Airlie. "Come down, come down Lady Ogilvie" he cried. "Come down and kiss me dearly. Or I swear, by the hilt of my good broadsword, I won't leave a standing stone on Airlie."

"Come tell me where your dowry is hid. Come down and tell me fairly." "I will not tell you where my dowry is hid though you shouldn't leave a standing stone on Airlie." They sought it up and they sought it down (I wat they sought it fairly), and it was below yon bowling green that they found the dowry of Airlie.

"Eleven bairns I have born, and the twelfth never saw his daddy. But though I had gotten as many again they should all go and fight for Charlie. If my good lord had been at home, as he's away for Charlie, There'd dare not a Campbell or an Argyll set foot in the bonnie house of Airlie."